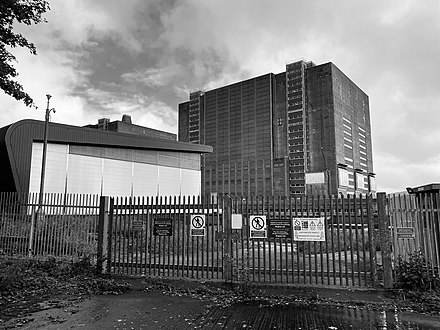 Trawsfynydd is a linear village in Gwynedd, Wales, adjacent to the A470 North of Bronaber and Dolgellau near Blaenau Ffestiniog. The Trawsfynydd Branch Line is the ex-GWR line in North Wales. The line runs from the Conwy Valley station at Blaenau Ffestiniog, passing through Manod, Llan Ffestiniog, Maentwrog Road, and finally terminating at the nuclear sidings at Trawsfynydd. The route is based in the mid-1990s, before the line was officially mothballed.

The power station, which takes its name from the nearby village of Trawsfynydd, was designed by Basil Spence. The construction, which was undertaken by a consortium involving Crompton Parkinson, International Combustion, Fairey Engineering and Richardsons Westgarth, and known as the Atomic Power Constructions (APC),[2] began in July 1959, and both of the reactors were in operation by March 1965, with the station opening fully in October 1968, at a cost of £103 million.[3] It had two Magnoxreactors producing 470 megawatts (MW) in total.[3] The reactors were supplied by APC and the turbines by Richardsons Westgarth.[3] The civil engineering work was undertaken by Holland, Hannen & Cubitts[4] and Trollope & Colls.[5] The architectural consultant for the buildings was Sir Basil Spence and the landscape architect was Sylvia Crowe.[6]

Afterglow xbox 360 controller driver. Nuclear flasks were transported to Trawsfynydd on a section of the former Bala to Blaenau Ffestiniog railway that had been closed in January 1961. A single track was restored northwards with an entirely new line through the centre of Blaenau Ffestiniog that connected to the Conwy Valley branch. In 1963-4 a 'Goliath' gantry crane was installed over sidings about 1⁄2 mi (0.80 km) east of the power station.[7][8][9][10] Beginning on 20 April 1964, nuclear flasks could be transported by rail between destinations such as Sellafield in Cumbria. The last regular departure was on 8 August 1995.[11] The last train to carry nuclear material from Trawsfynydd left on 22 April 1997 hauled by EWS Loco 37426.[12] The line was subsequently mothballed.[13] In 2016 enthusiasts, who want to create a heritage railway, began clearing vegetation along the route but have since been halted and are negotiating a new licence to clear.[14] 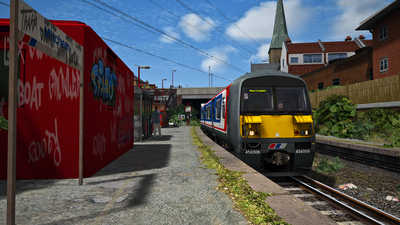 Trawsfynydd was shut down in 1991. The Nuclear Decommissioning Authority has the responsibility of decommissioning the site.The work is expected to last decades.[15]

Beginning in 1993, the highly-radioactive spent fuel rods were removed from both Magnox reactors and sent by rail to Sellafield. This was completed in 1997. Intermediate level waste - such as on the walls of the cooling ponds or pipes - has been carefully removed using robots over the next decades. Contaminated material is stored in a specially-designed building on the site.[15] It will eventually be removed for deep burial in the 2040s. Between 2020 and 2026, the top parts of the two reactor buildings will be partially demolished to reduce their height,[16] but the steel reactor cores - that housed the fuel rods - will not be removed because they are still far too radioactive. The final clearance of the site is scheduled to begin in 2071.[16] By 2083 the area is expected to have been restored to its pre-nuclear state; 124 years after construction started and 92 years after the closure of Trawsfynydd power station.[1]