The Letter of Pontius Pilate

Which He Wrote to the Roman Emperor, Concerning Our Lord Jesus Christ.

The main historical sources about the life of Pontius Pilate were: - Josephus (75-94 A.D. Approx.) - The New Testament (50-100 A.D. Approx.) - Jewish and Christian Tradition - Archaeology: inscriptions, coins, written text. Bibliography on Pontius Pilate. Pontius Pilate by Wroe, 432 Pages, Pub. Pontius Pilate a Novel by Maier, 384 Pages. Pontius Pilate was the Roman procurator in Judea from 26 to 36 A.D. Non-Christian authors (Tacitus, Philo, and Flavius Josephus) mention not only his name but also many details concerning his person and his rule. In a letter from Agrippa I, cited by Philo, his character is severely judged.

Pontius Pilate is a name that lives in infamy. Identified as the Roman governor of Judea in Luke 3:1, Pilate is mentioned in all four Gospels – Matthew 27:26, Mark 15:15, Luke 23:25, and John 19. ‘Pontius‘ is a variant on the Latin word ‘pons‘, meaning ‘bridge’. It may also have been a family name linked to the ancient Roman province of Pontus in Asia Minor – at the eastern end of the Black Sea. The origin of ‘Pilate‘ is unknown. A similar Latin word is ‘pilum‘, or javelin. THE LETTERS OF PONTIUS PILATE - REJECTED SCRIPTURES These thirty-three short letters are represented as written by Pilate to Seneca between the years 26 and 30.

Upon Jesus Christ, whose case I had dearly set forth to thee in my last, at length by the will of the people a bitter punishment has been inflicted, myself being in a sort unwilling and rather afraid. A man, by Hercules, so pious and strict, no age has ever had nor will have. But wonderful were the efforts of the people themselves, and the unanimity of all the scribes and chief men and elders, to crucify this ambassador of truth, notwithstanding that their own prophets, and after our manner the sibyls, warned them against it: and supernatural signs appeared while he was hanging, and, in the opinion of philosophers, threatened destruction to the whole world. His disciples are flourishing, in their work and the regulation of their lives not belying their master; yea, in his name most beneficent. Had I not been afraid of the rising of a sedition among the people, who were just on the point of breaking out, perhaps this man would still have been alive to us; although, urged more by fidelity to thy dignity than induced by my own wishes, I did not according to my strength resist that innocent blood free from the whole charge brought against it, but unjustly, through the malignity of men, should be sold and suffer, yet, as the Scriptures signify, to their own destruction. Farewell, 28th March.

Pontius Pilate is a name that lives in infamy.

Even though the Gospels make it clear that Pilate gave his final order to appease a mob that was demanding that Jesus be killed, the Apostles Creed and the Nicene Creed both put the blame squarely on Pilate’s shoulders.

The accounts of how Jesus and Pilate interacted are nearly identical in the Gospels of Matthew and Mark. Here are the highlights:

The chief priests and elders take Jesus to Pilate.

They accuse him before Pilate; Jesus does not respond to their accusations.

Pilate asks Jesus, “Are you the King of the Jews?” Jesus replies, “You have said so.”

Finding no “guilt” in Jesus that is worthy of a death sentence, Pilate decides to punish (flog) Jesus and release him.

Pilate asks the chief priests, elders, and crowd which man to release: Jesus or Barabbas?

The chief priests and elders persuade the crowd to ask for Barabbas.

Pilate asks, “What shall I do with Jesus?” The crowd responds, “Crucify him!”

Pilate washes his hands of Jesus’s blood, releases Barabbas, and delivers Jesus to be crucified.

One sentence in one Gospel, however, provides a different perspective on the infamous Roman governor:

In the account of Pilate’s interaction with the crowd, Matthew adds a verse not found in Mark. That verse is shown in boldface type below:

Pilate said to them, “Whom do you want me to release for you: Barabbas, or Jesus who is called Christ?” For he knew that it was out of envy that they had delivered him up. Besides, while he was sitting on the judgment seat, his wife sent word to him, “Have nothing to do with that righteous man, for I have suffered much because of him today in a dream.” Now the chief priests and the elders persuaded the crowd to ask for Barabbas and destroy Jesus.

Why is a verse on Pilate’s wife in Matthew?

The Letters Of Pontius Pilaterejected Scriptures In The Bible

After all, the wife is not named. She does not appear anywhere else in the Gospels. She lived during a time when the testimony of women was not considered credible. And her warning to her husband did nothing to change the outcome: Pilate gave the order to have Jesus crucified, and Pilate’s name is forever associated with that order.

The verse in Matthew certainly makes Pilate a more sympathetic figure to Christians than the one presented in the Creeds. And when you look closely at the Gospel accounts of Pilate, you see a man who was anything but entirely callous in his treatment of Jesus.

Mark 15:2-5
And Pilate asked him, “Are you the King of the Jews?” And he answered him, “You have said so.” And the chief priests accused him of many things. And Pilate again asked him, “Have you no answer to make? See how many charges they bring against you.” But Jesus made no further answer, so that Pilate was amazed.

John 18:33-38
So Pilate entered his headquarters again and called Jesus and said to him, “Are you the King of the Jews?” Jesus answered, “Do you say this of your own accord, or did others say it to you about me?” Pilate answered, “Am I a Jew? Your own nation and the chief priests have delivered you over to me. What have you done?” Jesus answered, “My kingdom is not of this world. If my kingdom were of this world, my servants would have been fighting, that I might not be delivered over to the Jews. But my kingdom is not from the world.” Then Pilate said to him, “So you are a king?” Jesus answered, “You say that I am a king. For this purpose I was born and for this purpose I have come into the world—to bear witness to the truth. Everyone who is of the truth listens to my voice.” Pilate said to him, “What is truth?” 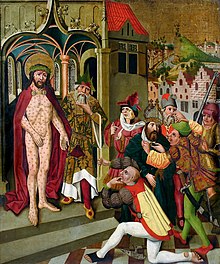 Luke 23:17-22
“I will therefore punish and release him.” But they all cried out together, “Away with this man, and release to us Barabbas”— a man who had been thrown into prison for an insurrection started in the city and for murder.Pilate addressed them once more, desiring to release Jesus, but they kept shouting, “Crucify, crucify him!” A third time he said to them, “Why? What evil has he done? I have found in him no guilt deserving death. I will therefore punish and release him.”

Matthew 27:18
For [Pilate] knew that it was out of envy that they had delivered [Jesus] up.

Why were the Gospel writers able to include such details about Pilate’s private conversations, thoughts, and feelings? Here are four possibilities:

1. God Revealed the Details to the Gospel Writers

As the Apostle Paul points out in 2 Timothy 3:16, all Scripture is “God-breathed” or “breathed out by God”. It certainly is possible that God gave the Gospel writers details on what Pilate said, thought, and felt. It is worth noting that each of the Gospels includes different details, so God would have had to reveal different elements to each writer. This possibility, of course, does not explain why God provided the details on Pilate.

After his resurrection, Jesus appeared to his disciples several times and, on at least one occasion (recorded in John 21), had a lengthy conversation with them. It is possible that, during a conversation with his close friends, Jesus shared details on his interactions with Pilate and how Pilate was feeling just before he sentenced Jesus to death. Given that Jesus had a very limited time with his disciples before he ascended, it seems unlikely that he would have spent that time discussing Pilate.

4. Pilate’s Wife Was the Reporter

The most likely possibility is that Pilate’s wife reported on the conversations, thoughts, and feelings of her husband. She would have known the intimate details because he told her after the dreadful day where he sent an innocent man to his death. And, of course, she would have remembered every detail because she had had a dream warning her husband to have “nothing to do with that righteous man”. Was Pilate’s Wife an Early Christian?

Pilate and his wife lived in Caesarea Maritime, about 75 miles north of Jerusalem on the Mediterranean coast. Pilate had come down to Jerusalem for Passover to keep the peace. The fact that his wife with him, and that she sent him a message at a critical time, suggests that the two were close.

In his Homilies on Matthew, the third-century Christian scholar and theologian Origen suggests that God sent Pilate’s wife the dream so that she may come to know Christ. Other theologians from the first few centuries to the Middle Ages also supported this view.

Certain segments of the Orthodox Christian Church hold that Pilate’s wife, who sometimes is given the name Procula Claudia, not only converted to Christianity after the Resurrection but also was executed as a Christian. In fact, these Christian groups consider her a saint.

There is an icon of Pontius Pilate and his wife in Hurghada, Egypt, and Coptic Christians actually venerate both as saints, which means that they believe that Pontius Pilate also became a Christian.

We may never know for sure if Pilate’s wife became a Christian. We don’t know if she shared her testimony with other early Christians. We don’t have proof that she directly or indirectly shared with one or more Gospel writers, or if she encouraged her husband to follow Christ as well.

But we do know that every verse of the Bible—including a verse about a Roman governor’s wife having a bad dream about Jesus—is there for a reason.

Sources:
Anna Wierzbicka, What Christians Believe: The Story of God and People in Minimal English, 2019
The Catholic Encyclopedia

Pontius Pilate What Is Truth

Chris Bolinger is the author of Daily Strength for Men, a 365-day daily devotional from BroadStreet Publishing. The book is available at Amazon, Barnes & Noble, Christian Book Distributors, DailyStrengthForMen.com, and on the Inspirational Reading rack at many supermarkets, drug stores, gas stations, and gift shops.