Pokémonthe Movie 2000 is available for rent or purchase in the iTunes Store, Google Play, and Amazon Video.

Ash and his friends are on their journey through the Orange Islands—but even this seemingly quiet chain of islands dotted throughout the waters far south of Kanto has its own mysteries, adventures, and Legendary Pokémon! Lawrence III certainly knows it, which is why he's now traveling to the different islands and capturing the three Legendary birds—Moltres, Articuno, and Zapdos. But even with all their power, those three are merely a stepping stone to an even greater prize: Lugia, the guardian of the sea!

Of course, Ash is completely unaware of all this when he arrives at his latest destination. The islanders have big plans for him, too, but nothing so sinister—they want him to take part in a ceremony to gather three elemental balls from different islands. When the weather across the world goes out of control, this task takes on a new importance, as the capture of the Legendary birds has thrown the environment out of balance. With Lugia's help, can Ash be the 'chosen one' that everyone turns to?

Just like its predecessor, “Pokemon: The Movie 2000” is a shameless attempt to cash in on the Pokemon craze, which pretty much died down a long time ago. Also just like its predecessor, it’s dull, sloppy, poorly dubbed and incomprehensible, and appears to have been animated by, well, no one. I’m guessing the animation department took the week off, leaving us with this characteristically crappy Japanese “style” of animation in which nothing moves, which really stretches the definition of “animation” for me, but I won’t belabor that point.

Of course, it wasn’t meant to entertain me, or anyone else above the age of 8. And most of the kids — the boys, anyway — who were in the audience with me seemed to be mostly entertained by it, though they didn’t seem to exactly LOVE it. And let’s face it, anything with bright, colorful objects that sort of move around is liable to entertain a 5-year-old.

The movie begins with a 23-minute short entitled “Pikachu’s Rescue Adventure.” Surely you remember Pikachu. He’s the adorable little gopher-shaped Pokemon of dubious gender origins whose powers include the ability to annoy people. The only word he can say is his own name, though he uses it in such a way as to indicate that to HIM, it means whatever he wants it to mean. How to reduce glare on screen without tinting windows.

In “Pikachu’s Rescue Adventure,” Pikachu and his pals have an adventure rescuing someone, though I am not entirely clear who it was they rescued, or what danger they rescued them from. All I know is, since there are no humans in the story, there’s no real dialogue either, and we’ve already mentioned that wordless animation is not the strong suit of the Pokemon films. I suspect the reason I did not enjoy this short was that I did not smoke enough crack beforehand.

Then we move on to the main feature. This one has people, so there is talking, though you’ll soon wish they’d shut up. Basically, there’s a bad guy whose name we are never told (Rule #1 of movie-making: If you’re going to have a bad guy, tell us his name), who smiles a lot and actually seems rather friendly, a lot like Frasier Crane. Anyway, he wants to capture three mythical birds that represent fire, lightning and ice, because somehow having all three will enable him to also control the Beast of the Sea, whose name is Lugia, often pronounced “Nubia,” “Lukia” or “Nokia,” depending on who’s talking. Why he wants to control the Beast of the Sea is anybody’s guess.

No-Name captures Moltres, the bird of fire, pretty easily, and Zapdos, the bird of lightning, proves no more difficult. In capturing Zapdos, though, he also accidentally sucks Pokemon trainer Ash and his friends, along with several Pokemon, onto his hovering spaceship. The Pokemon go about setting the two magic birds free, whereupon the two birds inexplicably start trying to kill each other and their rescuers.

At some point, Ash discovers that each bird has a magic ball that represents it, and that if you put all three balls in a special place facing each bird’s home island, something good will happen, I forget what. He gets Moltres and Zapdos’s balls, and then figures out he’s the fulfillment of ancient prophecy and has to go to the island of the ice bird, whose name is Articuno, and get his sphere, too.

No-Name disappears for a while, but comes back at the end to cause trouble in his genial, laid-back sort of way. All the while, the three magic birds are fighting each other, and the gentle Beast of the Sea, who speaks without moving his mouth and sounds the way Jesus always sounds in movies, helps Ash and his friends along. 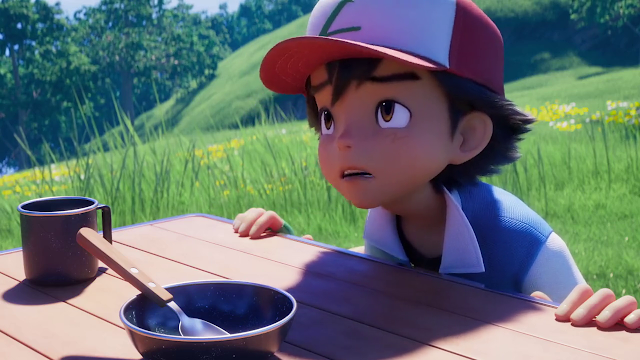 Oh, and there are some other kids who like to steal and try to thwart Ash’s plans but wind up turning good and being heroes, but I’m not going to mention them, because they’re stupid.

This is not a movie “for the whole family.” It’s for little kids. Parents should avoid it, opting instead to stay in the car and stick their heads in the glove compartment for 90 minutes, as that will surely be a more tolerable experience for them than sitting through the movie. In fact, find something better to take your kids to, something you can enjoy with them. Or stay home and rent something. Read a “Harry Potter” book. Do anything. But for the love of all that is holy, don’t see “Pokemon.” We don’t need to encourage this kind of cynical, soulless, assembly-line crap factory.