At the time, getting mods set up on Linux (and Mac)was a little more involved than on the Windows side, since the automated toolsto enable mods in BL2/TPS which worked on Windows didn't work on Linux systems,and the alternatives required some manual effort (and data collation, which iswhy I'd originally put this page up).

As of July 10, though, theBorderlandsCommunity Mod Manager (BLCMM) was released, which features new methods ofenabling mods on Linux and Mac, and works a treat! So, that is now the recommendedway of enabling mods on Linux and Mac. There's still some 'gotchas' whenusing BL2/TPS mods on Linux, but since the original creation of this page,the modding project's wikihas been updated quite a bit, including a page onLinux andMac Setup Gotchas, which details most of what this page used to.

So, honestly, at the moment those are your best resources! Install BLCMM toget mods running (and manage your mods), and take a look at that 'Gotchas'page to make sure you're aware of some of the other things. (Disclaimer:I've been helping out with BLCMM development for awhile now, so obviouslyI'm biased. It's pretty great, though.) 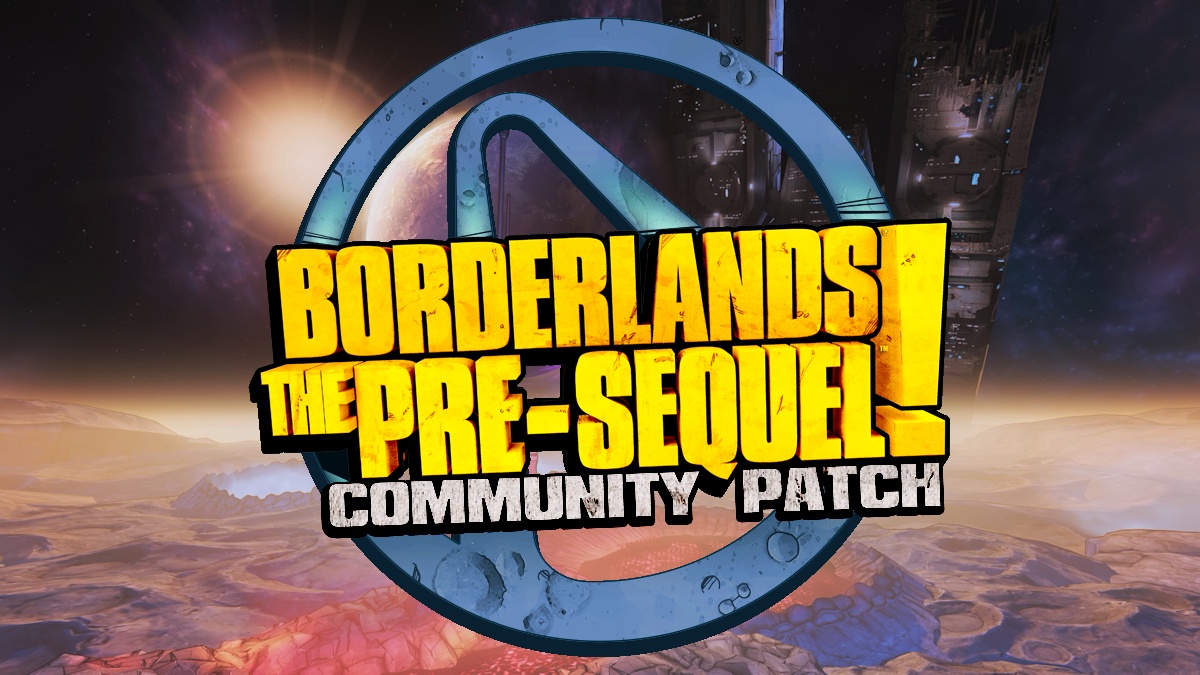 Issues to Keep In Mind

These are mostly all mentioned in theLinux andMac Setup Gotchas page of the BLCMods project, but I'm keeping themhere as well for reference, since they're already written and why not?

When you try to execute patches in Borderlands 2/TPS on Linux, the filenamethat it tries to execute will automatically be converted to all-lowercasebefore it looks for the file. So if you have a file named Patch.txt(with an uppercase 'P') and try to exec Patch.txt (also with anuppercase 'P') , you'll get a confusing error message saying that itcouldn't execute Patch.txt, even though the file clearly exists.

So, make sure that your file is all-lowercase. If you want to keep theoriginal case of the distributed UCP files, you can always set up symlinkslike so:

Execute Mods From the 'Press Any Key' Screen

Windows users are able to execute mods right from the main menu (where yourcharacter is seen shifting weight occasionally), but that doesn't work onLinux or Mac. Instead, we've got to execute the patch from the 'Press any key'screen, though you've got to first hop into the main menu to ensure that allthe DLC is loaded. So, to run patches, this is the sequence:

Note that Linux/Mac doesn't have a handy autoexec method like Windowshas. That's one area where we're still lagging behind.

When Borderlands loads a savegame, it runs all the weapons and items inthe savegame through a 'sanity check' to make sure that the items arevalid. If an item/weapon is discovered which fails the check, it issilently removed from your inventory. If you don't notice at the timeand the game saves over your game, you'll have lost that item. (HittingAlt-F4 to force-quit the game would prevent overwriting yoursave, if you notice in time.)

Some Borderlands mods will create items which would otherwise run afoulof this sanity check. So long as you remember to execute the patch/modbefore continuing the game from the main menu, the sanity check won'ttouch your modded weapons, but it's easy to occasionally forget to execute the mod before actually loading the game, which could lead to lostitems. So, the solution is to disable these checks!

c0dycode has aBorderlandsMac and Linux Stuff page with information on hex-editing to disable thischeck, along with a little Python script to automate it for you. (c0dycodealso created a HexMultitool project for Windows which does this and other tweaks, but thatonly works on Windows binaries.) For reference here, these are the valuesyou'd need to tweak if you wanted to hex edit yourself:

NOTE: OSX's historical filesystem,HFS+, does not havethis problem but starting with10.13/High Sierra,APFS is starting to be used, and that does appear to have the same problem that Linux users have. If anybody has experience setting up alternate mountpoints in macOS, let us know (or edit this page) to let us know how to address it on those platforms.

This is a rather strange situation which occurs because of some cross-platform differences between Windows and Linux, and because of some behaviors of the Borderlands engine.

Basically, when looking for DLC on your hard drive, Borderlands looks inside the steamassets/dlc directory and loads the mods in the order they're given by the kernel. On Windows, the filesystem driver will return the directories in alphabetical order by default. On Linux, the order of the directories is effectively random. (When looking at a directory listing via ls on Linux, the ls command does the sorting for you. Microsoft visio 2016 download 64 bitbaldcirclekidz windows 10. If you want to see the 'native' order in which the directory entries are given, you can run 'ls -U' or 'ls --sort=none'.)

As the engine loads these DLC, some of the property names get dynamically-assigned number suffixes, and the numbers depend on what order the DLC is loaded. Mods which try to edit these values need to hardcode a number to use -- any mod written/tested on Windows is going to be using the numbers you get by sorting the directories alphabetically. For instance, the internal part list collection for one class mod from the Dragon Keep DLC has this property name:

However, on my main Linux desktop system, the property was showing up as:

And on my laptop it was a different number entirely. This doesn't have asuper wide impact, since there aren't that many mods which actually touchthese variables, but UCP does contain a few statements which do, and you'llrisk not getting the full effect of some mods.

Unfortunately, the only real fix for this is to mount your Borderlands DLCdirectory under a separate filesystem which supports sorting directoriesalphabetically. No native Linux filesystem does this. It's possible todisable some features on an ext4 filesystem, so that directory entries willbe given in the order in which they were created. So theoretically youcould create an ext4 partition, use the following tune2fs commandon it:

.. and then carefully copy the DLC directories into that filesystem, oneat a time, in alphabetical order. That method seems quite fragile to me,though, and I wouldn't recommend that even though you'd still be using anative Linux FS.

What I've done on my own system is to just resign myself to using NTFS. The Borderlands 2 DLC dir contains a little over 6GB of data, so I created a new 10GB LVM LV, used 'mkfs.ntfs /dev/vg/bl2dlc' (obviously substitute the proper device name there), copied over all the DLC data into that new filesystem, and then added the following to my /etc/fstab -

Note the special string '040' in the pathname, required because there's a space in the directory name. Adjust the device name, path, UID/GID/unmask, etc, to suit your circumstances. Make sure that the dir is mounted properly and that the DLC data is in there, and you should be good to go. You can use 'ls -U' in the DLC directory to verify thatthey're showing up in alphabetical order now.

So.. yeah. That is quite weird, and I suspect not a lot of folks are going to be willing to do something like that to their system, just to support some game mods. Still, if you're looking for 100% mod compatibility inside Linux, this is a step you'll have to deal with.

If you'd still like to take a look at all the older info about replacingengine.upk files (no longer necessary), and other fiddly bitslike that, take a look at the legacy page.

So, that's it! Aside from the directory ordering thing, things arepretty straightforward now that BLCMM's been released. If there'sanything in here which is wrong, incomplete, needs streamlining, or just if there's something else which would be useful to have on this page, feel free to contact me!

Jim Raven and a team of modders have released a new version of their unofficial community patch for Borderlands: The Pre-Sequel. In case you weren’t aware of, this unofficial patch re-balances many aspect of the game in order to make weak guns, skills and other gears that you’d always toss, don’t pick up or don’t use a viable option. Not only that, but it also makes all gear farmable instead of world drop/grinder only.

The latest 2.2 version of the unofficial community patch features all of the previous changes like giving MoonStone Chest a chance at Legendaries, reducing The Random legendary drop from Chubbies from 60% to 30%, tuning down chubby spawnrates a tiny bit more, fixing an issue with FlameKnuckle Dropping the Pitchfork as he shouldn’t and forcing Pitchfork to cost 1 ammo per shot (instead of 2).

Those interested can download this unofficial community patch from here, and below you can find a video that explains how you can install it.

An easier tutorial on how to install the Unofficial Community Patch for Borderlands 2.

Unfortunately the team has not revealed the release notes for version 2.2 so we are certain what has been changed. However, we do know that this community patch comes with over 335 changes in total to re-balance the game.

John is the founder and Editor in Chief at DSOGaming. He is a PC gaming fan and highly supports the modding and indie communities. Before creating DSOGaming, John worked on numerous gaming websites. While he is a die-hard PC gamer, his gaming roots can be found on consoles. John loved - and still does - the 16-bit consoles, and considers SNES to be one of the best consoles. Still, the PC platform won him over consoles. That was mainly due to 3DFX and its iconic dedicated 3D accelerator graphics card, Voodoo 2. John has also written a higher degree thesis on the 'The Evolution of PC graphics cards.' Contact: Email